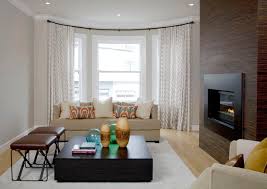 I use some really neat stuff in my business —  stuff that isn’t available in local retail stores but which I get asked about often. So, I’m going to let you in on 5 Drapery-Maker’s Secret Tools, tell you what they are, what problems they solve and where you can buy them. And the news there is that you can buy them from me. I’ve added them to my store ( look up on the navigation bar, “Buy Things”) and I’ll mail them to you or you can call me at 250-833-1120. 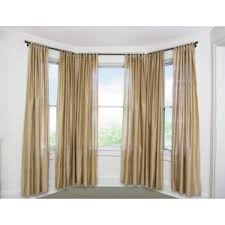 1. I see a lot of bay windows with curtains that don’t draw all the way to each side because of the rod — like in this picture. This window also has way too much curtain for such a small window, and the curtain to window proportion isn’t the same between the side and center sections. I’d bet these were panels bought and hung on three rods.

I use a bay window rod that lets you draw the curtains all the way to the outer edge — the rod is attached to the brackets along the top of the rod so the drapes aren’t hindered by brackets. They attach to the rod with drapery pins hooked into glides that run in a channel on the bottom edge of the rod.

It can be bent to match the angles of your bay, in any length, or it can be used as a straight rod.

It can attach to the ceiling of the bay or to the window wall. It doesn’t look as icky as the old I-Beam rod, so it is a great, inexpensive alternative to that, too.

Look closely at the picture, the rod is that non-invasive white line that follows the angle of the bay. 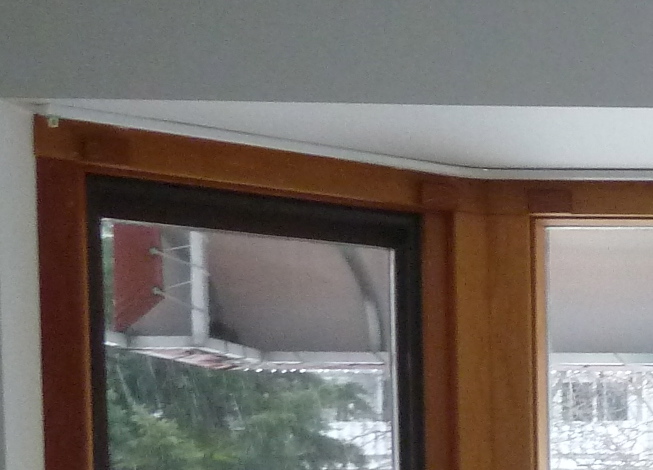 2. Non-tilting drapery pin. Thrilling stuff, no? A drapery pin is the S-shaped hook that connects

your pleated drapes to the rod or wooden ring. What makes the non-tilting pin special is that it has a little crook in it that keeps the top of the drape straight, preventing it from tilting forward. If your drapes fall away from the ring or rod, just replacing the pins may fix the problem.

3. Fling rods. These are the metal, plastic or wood rods used to pull drapes closed or open rather than grabbing onto the drape itself with your hand. They connect to the leading

window-side edge at the top edge of hand-drawn drapes and come in a plethora of lengths, and can even be had made of stained wood with decorative ends. Keep the drapes clean, longer because your hands don’t touch the fabric.

5. Clutches for Roman Blinds — these are the gizmos that control the cord lift and lock. I know a lot of you are making your own window

coverings because you are asking me where to buy these components. The only one typically available doesn’t work that well for several reasons —  I’ve found a great clutch at a reasonable price.