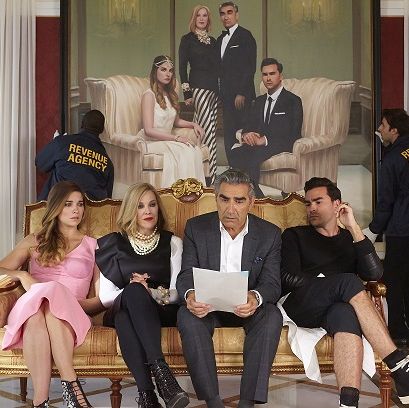 I binge watched the first four seasons of Schitts Creek over three days during the stay-home time this spring. It was one of my best binges ever.  I felt like a side-line cheer-leader as the characters transitioned from their self-absorbed singular lives to the close family they became.

At the end of the first episode, we see them in their empty grand mansion, sitting together on a sofa,  in front of an ostentatiously large family portrait — one of the few possessions they were left with.

And off they go to set up house in a motel which looks like it was the flag-ship for the ‘Tour Route 66’ in the 1950s. It’s deplorable, its shabby, it’d dark and oppressive. It’s loathsome. And here they are… a mother who doesn’t know her daughter’s middle name, a son who has enough phobias and foibles for his own series, an impossibly shallow daughter and a totally oblivious and ill-prepared father.

But their self-imposed prison of the adjoining rooms transitions over the series into a home. It becomes the sanctuary where they re-group, where they puzzle out the meaning of community, where they slowly build bonds which tie them together as a family.

Alexis makes a little office in the corner, it ain’t much, but it’s all she needs. And Moira congratulates her, with obvious pride, on her ‘little space’.  David installs coordinated bedding, complete with a toss pillow, on his single bed. Of course it’s black and white. And the bed is always made, it’s always tidy. It’s always ready for him to collapse on.

Moira has her friends hanging on the wall in her room. They are her comfort zone, her touch-stones which remind her of who she was. And it’s a huge break-through when she lends one to Stevie to wear in Cabaret. When she moved into the motel, no one could even touch one.

And Johnny — well, he gets a brief case, and continues forward, he’s humbled, and embarrassed, but he perseveres, and he watches his family grow, and blossom, and he follows their lead, as all good leaders do.

And in the end, that self-imposed jail has become a home. The huge portrait is gone to the dump, and the Roses have found their worth, and strength, in each other and themselves. Not on the shiny objects of their former lives.

During this time-out here in our city, I saw more older couples walking together than I’ve ever seen before in my time here. I saw people on bikes — who hadn’t been on one for a while, that was clear. I know that yeast was not available in some stores for a while.  And there was a resurgence of  ‘learn to sew’  questions on some of the FB forums.

A young man I know was probably going to be held back because of his reading and math skills. He reads well now, and once he learned a few times tables, and his mother stopped the nonsense of boxes with tens around it, he understands his Grad 3 math just fine.

It’s been a time of introspection, a time of learning. For me, a time of growth and renewed purpose. And renewed understanding of the importance of family. And dear friends.

I hope that this has been a time of peace for you. I hope we can keep this renaissance of learning and loving as we move into our next chapter.  I hope your houses are your homes, and that you will stay safe there.