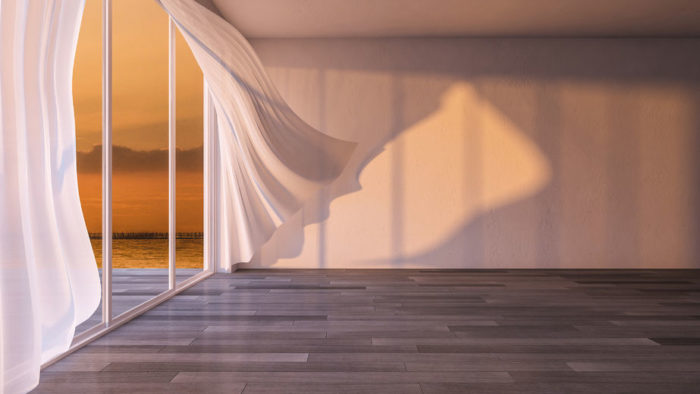 While she agreed, and acknowledged that fact, I wasn’t surprised to get a phone call a few weeks later saying that the curtains were blowing around in the wind and what could I do to stop that. While I may,  (MAY,)  have thought about suggesting a piece of plywood, I didn’t say that. I had to remind her that “fabric + wind= moving curtain”.

There have been a few “solutions” to the blowing in the wind phenomenon over the last while, probably due to the increase in outdoor rooms in homes.

I just saw one solution the other day where the answer was to stake the two outside bottom edges down with humongous cup hooks put through grommets in the bottom of the curtain. It did hold the edges down, true, but the center of the curtain made a really nice sail. And in the demo it looked like the whole thing could have wind-powered a small boat across Okanagan Lake at top speed.

I’ve been asked to put more weights in the bottom hem. Which I won’t do because that just makes the bottom hem a weighted projectile. Imagine your eye in the path of that.

I’ve been asked to fasten the bottom edge to the floor somehow or to run a rope through the bottom hem and fasten the ends down. Like a sail.

And I have to go back, every time, to the basic issues of “fabric +  wind = moving curtain”.

I always thought there should be a solution.  There had to be one. Somewhere. There are a lot of outdoor curtains in this world, someone must have figured this out.

I kept thinking that the solution revolved around vertical slits in the curtains – just like the vertical slits in banners strung across roads. But I knew that alone wasn’t the solution. I have a way of making them now which drastically reduces the blow-around effect.  Here’s how.
You need to think this through. No, there isn’t a pattern. Any even semi-accomplished drapery maker will understand.

First of all, the top of the curtain must allow the wind to blow over it with the least amount of resistance possible. A straight-across top will create resistance. Oh — ‘resistance’. Think: ‘curtains billowing uncontrollably’.

A top edge which is not straight will let the wind pass over without creating the sail effect. So how do you accomplish that? DEEP scallops between the tab tops or grommet tops. Simple as that.

And to prevent the sail effect on the drapery itself, position long vertical slits in several places across the width of the panel.  Fasten the slits together every 16 inches or so down the slit. Just a solid tack or two from one side to the other will work.

Try to position these slits so they are on the side on a backward fold of the pleat. That way, when the drapery is closed and hanging, the vertical slits are less visible.

I’d also suggest that these slit edges have a double fold and a good solid double line of stitching. NO exposed serged edges.

I don’t weight the hems at all.

You might also want to consider several tie backs down the length of the panel when it’s closed.