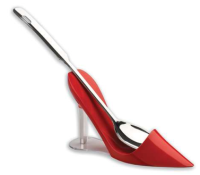 When I first became interested in Interior Design, I had a bit of a problem understanding just exactly what “form follows function” meant. (It was said by architect Louis Sullivan in 1896.) It made sense that the function of an item must come first, and the design must come based on the function. For example, a spoon fulfills a certain function, which determines its shape. If you mess with the shape too much, you loose the functionality.  When I worked at Chintz and Company in Calgary we fabulous flatware; it was expensive but each pattern was unusual and a work of art. The hand-forged handles on one pattern ended in a flat spiral resembling a Fiddlehead fern. The only problem was that the spiral interfered with the balance of the piece; they were difficult to hold and using the knife was almost impossible   We had another set with a READ MORE